Lean about Medicine Bow's wide ranging history with a tour through our historic train depot from 1913 and Owen Wister's Cabin and Monument.

The Native American tribes of southern Wyoming coined the name “Medicine Bow” after finding mountain mahogany in the mountain valleys. Bows were crafted from these shrubby trees due to their strength and durability; the bark was used medicinally for various treatments. Later the name, Medicine Bow, gained worldwide recognition through Owen Wister’s novel, “The Virginian”.

Our history is filled with unique milestones. Plan to take your time when visiting our museum and learn about important events that furthered western expansion. 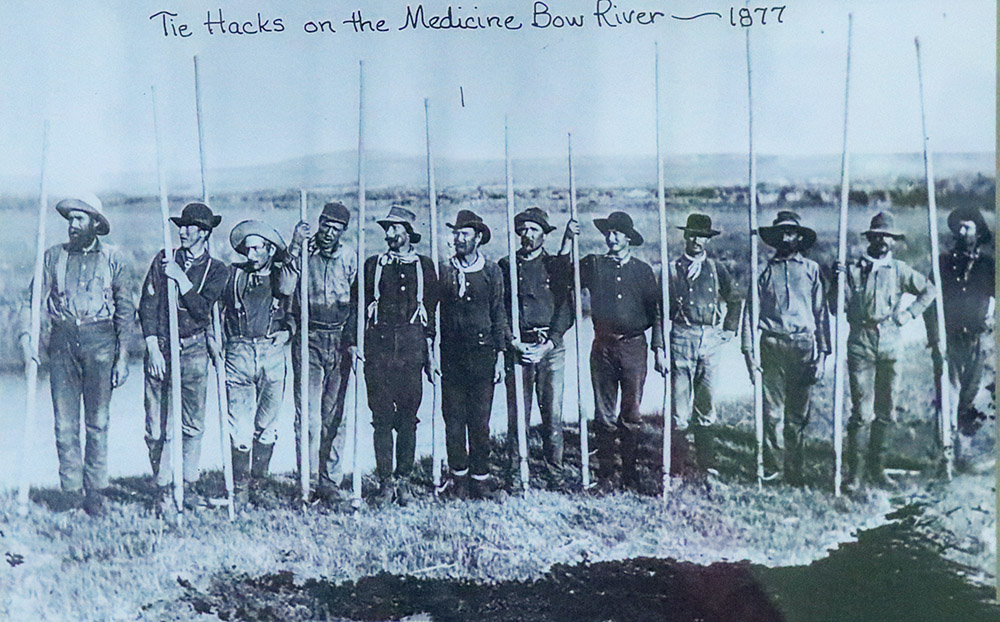 Westward expansion, which had heavily relied on covered wagons, gradually transferred to rail. The construction of the first transcontinental railroad continued through southern Wyoming. With the help of "tie hacks", logs were felled in the nearby Medicine Bow Mountains, floated downstream to the Medicine Bow River before being collected and cut.

A store and a saloon were the beginnings of Medicine Bow. With the arrival of the railroad, the town sprouted up to include a five-stable roundhouse, service facilites, a water tank for locomotives, and a pump station on the river. In a very short time, Medicine Bow became a central supply point for the area with supplies arriving from the east and large quantities of military supplies shipped to nearby forts.

During the late-1870's, the Trabing freighting business was supplying more than three million pounds of government supplies to military posts north of Medicine Bow. Additionally, approximately 2,000 cattle a day were being shipped east from Medicine Bow by train. Cattle arrived from as far as Idaho and Montana. Stockyards were built to contain them.

The remote, one street town develped a certain degree of roughness during this time. There were frequent saloon brawls, stray bullets, dancing on tables and a wild west brand of justice.

By 1890, the population had grown to 105 people. The majority were employed by the railroad. Sheep ranching began in the area and shearing pens were contructed. Within a decade, 1,000 tons of wool would be shipped annually from Medicine Bow and the population would expand to 236 people. 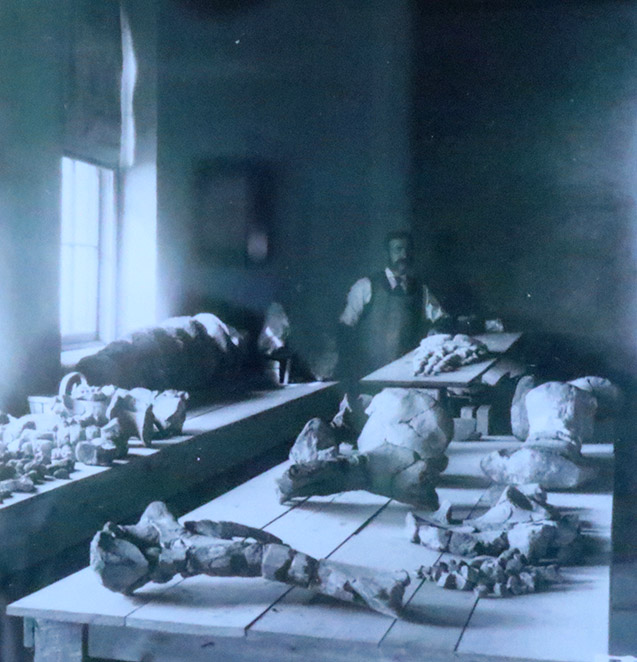 Two Union Pacific Railroad employees at the Como Bluff Station (north of Medicine Bow) stumbled upon huge dinosaur bones while out antelope hunting. Their discovery became the first of many complete dinosaur fossil skeletons. Hundreds of bones were unearthed at Como Bluffs, including the Carnegie diplodocus.

The historic Fossil Cabin, currently located about five miles east of Medicine Bow, was built in 1932 as roadside attraction on the Lincoln Highway. The Medicine Bow Museum is in the process of relocating the cabin to their grounds.

The depot was built when the railroad was relocated from Rock Creek and Carbon to Medicine Bow. The original depot burned on July 24, 1913, but was rebuilt later that year. It served the Medicine Bow area for 68 years until the railroad closed the depot in 1981. The Medicine Bow Depot was then transferred to the Town of Medicine Bow. Currently, it houses the community museum.

The depot is a classic example of the type of train station constructed in Union Pacific towns. The building is a single-story, white clapboard structure,rectangular in shape, with red baked clay shingles. It also features woodframe windows, spaced evenly along the sides of the building.  On the south long side of the building, there is a baywindow that allowed the station master to see incoming trains on the tracks some 75-100 feet south of the structure. The interior is basically unchanged from the original design. 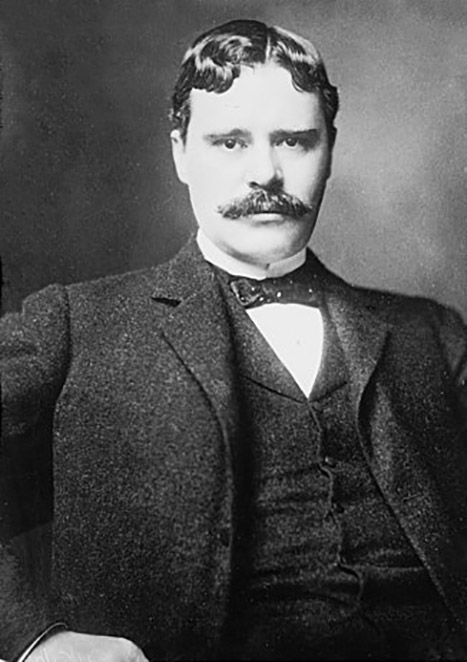 Medicine Bow was made famous as the setting for Owen Wister’s 1902 western novel The Virginian. Wister traveled regularly throughout Wyoming between 1885 and 1902. He helped write the script for the dramatic stage production in 1904. Since then, the story has been made into 4 films and a successful television series.

His cabin was moved from Jackson Hole to the Museum grounds as a bicentennial project by the Lion's Club and later donated to the Museum.

A memorial monument, made of petrified wood, was erected in 1939 by The Historical Landmark Commission of Wyoming as a tribute to Owen Wister.

Town of Medicine Bow is Incorporated

On June 26, 1909, the Union Pacific Railroad Company tranferred ownership of the town to the newly incorporated Town of Medicine Bow.

August (Gus) Grimm, the first mayor and state legislator, built the 3-story Virginian Hotel in 1911. The Virginian (named after the central character in Owen Wister's novel) would be the first building in Medicine Bow to feature electric lights, steam heat, hot and cold running water, and telephone and telegraph facilities. 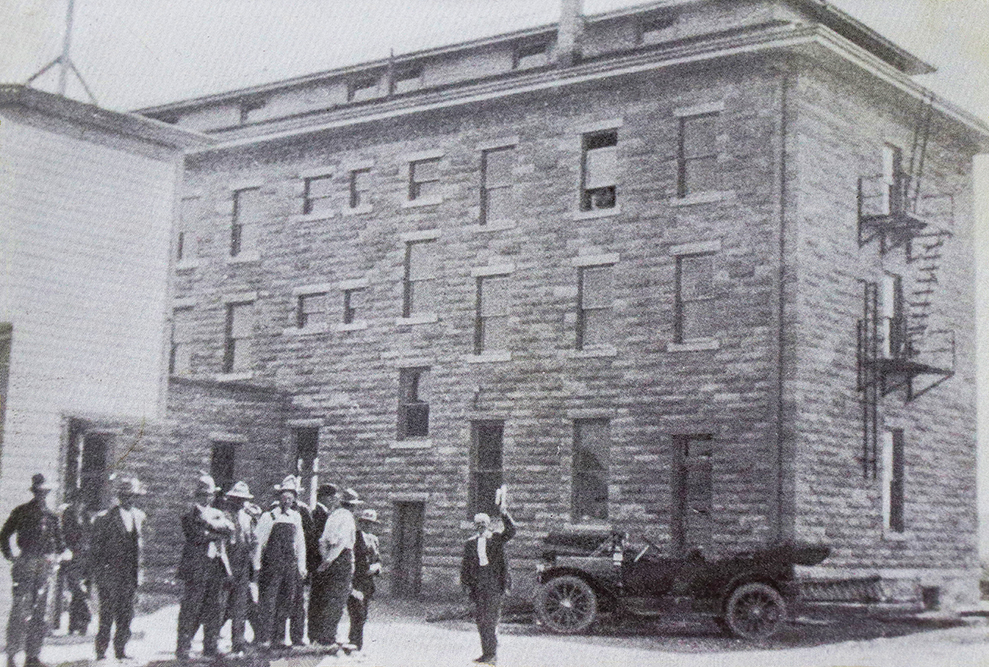 America's first coast-to-coast highway followed the railroad and increased auto travel to Medicine Bow’s Virginian Hotel. Grimm was instrumental in fighting for Medicine Bow to be selected as one of the warm and hospitable towns that welcome Lincoln Highway travelers. 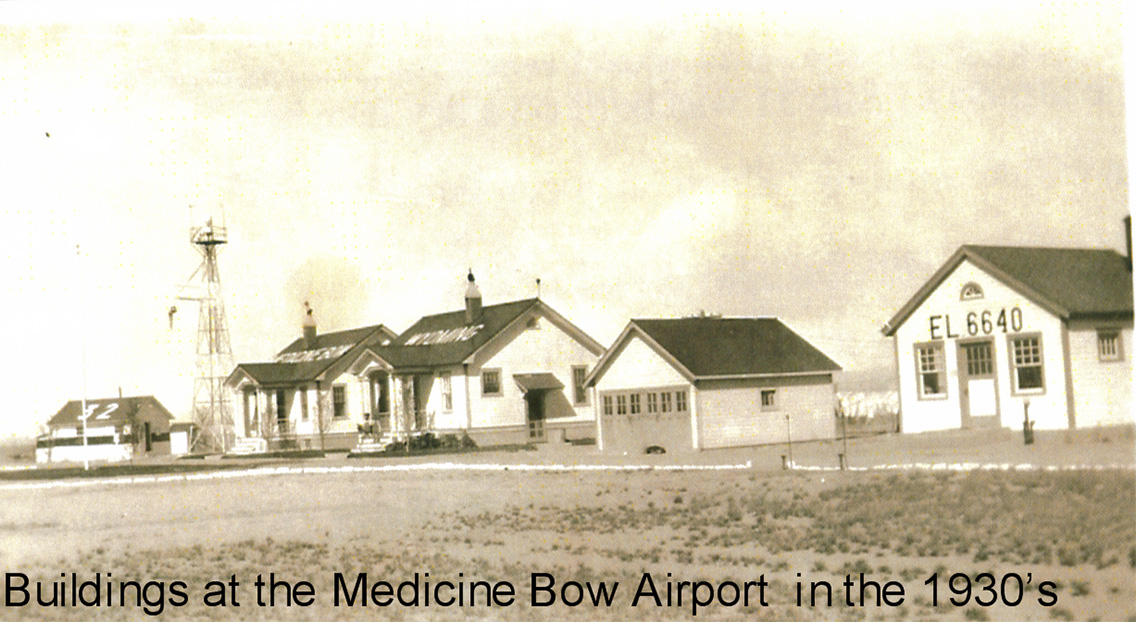 Before radio navigation became a reality in the early 1930s, the US airmail service relied on a series of landing fields. Nighttime airmail service began in 1924 when lighted beacons were installed. Beacons were placed every 25 to 50 mies along the airway route. In 1930, an airfield named "SL-O 32" was established as an intermediate landing field. Located one mile south of Medicine Bow, the site included the beacon tower, the concrete directional arrow, and the generator shed. The tower, directional arrow and shed are still in existence today.

Advances in radio technology through the 1930's allowed pilots to fly coast to coast regardless of weather conditions. The Medicine Bow low-frequency radio signal connected the radio beams from Rock Springs and Cheyenne, completing the route from San Francisco to New York. Pilots could now fly across the country safely and more efficiently than ever before. 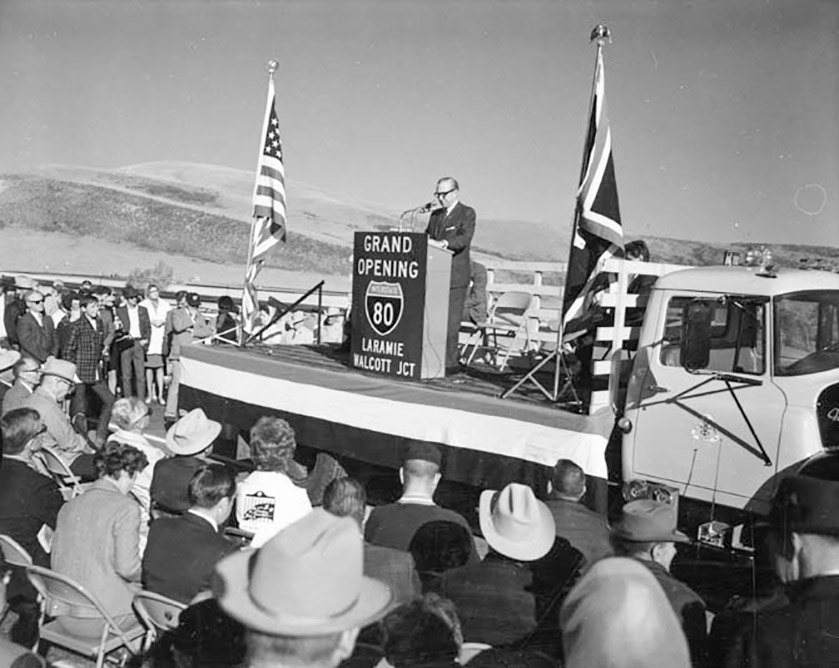 When the Union Pacific Railroad was planning and constructing the nation’s first transcontinental railroad, it decided against a shorter, more direct route through the mountains of southern Wyoming. However, to save 19 "unnecessary miles", federal representatives opted to route Interstate 80 between Laramie and Walcott Junction. This decision hurt the communities along the Lincoln Highway, particularly Medicine Bow.

Fortunately, as the demand for yellow cake uranium and low sulphur coal increased, so did the population of Medicine Bow. People came from all over to share in the prosperity. In the late 1970s, nearly 1,000 people lived in Medicine Bow.

Two wind tubines were built 6 miles southwest of Medicine Bow as part of the U. S. Department of Energy's alternate energy research project. On September 4, 1982, Wyoming's first wind power turbines were dedicated and the day was proclaimed "Wind Turbine Day". One turbine, built by the Hamilton Standard Company, was the world’s largest at 391 feet tall and capable of generating 4 megawatts. The other turbine, built by Boeing Engineering and Construction Company, stood 350 feet tall and was capable of generating 2.5 megawatts. The Medicine Bow Wind Energy Project was a first and advanced the science for large-scale wind farms.

As national energy plans shifted toward clean, renewable energy, the once properous local mines began to close. People left Medicine Bow as quickly as they had arrived in the 1970's. The bank closed, the newspaper closed, the railroad depot closed and eventually, due to declining enrollment, the secondary schools closed. By 1990, the population declined to 380.

The Union Pacific Railroad still travels through Wyoming, delivering goods around the country. Although trains no longer stop in Medicine Bow, the depot continues to operate as a community museum. Since 1983, the Medicine Bow Museum has been preserving the events and people who made a significant contribution to our history. It is listed on the National Register of Historic Places.

Medicine Bow is located along the Historic Lincoln Highway (US-30), fifty-five miles northwest of Laramie, 53 miles east of Rawlins, and 95 miles south of Casper.

At the junction of Reynolds Street and US-30/US-287, head north for 55 miles to Medicine Bow.

The Medicine Bow Museum will be on the left, across from the Historic Virginian Hotel.

Take exit 235 at the Wolcott Junction.

Turn left (north) onto US-30/US-287 and follow for 34 miles. The Medicine Bow Museum will be on the right, across from the Historic Virginian Hotel.

Turn left at the WY-487/US-30 intersection and follow for 0.2 miles to the Medicine Bow Museum.

The Medicine Bow Museum will be on the right, across from the Historic Virginian Hotel.

At the US-30 intersection at Hanna, turn right and proceed east for 19 miles.

The Medicine Bow Museum will be on the right, across from the Historic Virginian Hotel.

While you're in the area, be sure to add these attractions to your list.

we appreciate your support

Receive news and event updates for the Grand Encampment Museum.

Thank you! Your submission has been received!
Oops! Something went wrong while submitting the form